Breal
Search
MEET OUR TEAM
We came together as a team in 2017 and collectively founded Art400^2 as a way to promote and sell art in beautiful St. Andrews, NB.  Located on St. Andrew's busy Water Street, Art400^2 is a quaint space made up of 400 sq ft of gorgeous one-of-a-kind, maritime hand-made work. ​

Juliette Scheffers (promotions)
Juliette’s specialty is crystalline glazes on high‐fired porcelain. Crystals in the glaze are developed by manipulation of the kiln atmosphere by recreating a similar environment in which natural crystals grow.  Juliette’s passion and know-how is demonstrated in her one of a kind works, but also in her functional pieces. Her journey in clay has been published in the Globe and Mail, Telegraph Journal and the Daily Gleaner.  She has participated in several  shows in various galleries throughout the world. Juliette has received a Travel Grant(2013) and a Mid-career Creation Grant from ArtsNB (2016).

Matt Watkins (general manager)
New Brunswick painter and jeweller Matt Watkins is a graduate of NBCCD and NSCAD University (2004). He owns and operates Earthforge Jewellery. His high quality, original oil paintings and jewellery are sold at art galleries, craft festivals and online, and have been displayed in a number of solo and group exhibitions. His skills have been sharpened through the making of one-of-a-kind, custom and production-based work and he regularly teaches courses in Drawing, Painting, Jewellery and Art History to students of all ages. Matt recently was awarded the prestigious Nel Oudemans award (2018).

Sarah Brinkhurst (administration)
Graduating with a First Class Honours in Silver/Gold Smithing and Jewellery Design and recipient of the Precious Metal Bursary Award from University for Creative Arts in Kent, England, Sarah Brinkhurst emigrated to Canada in 2008.  Since, she focuses on private and gallery commissioned works in the Maritimes as well as managing artist co-operatives. Sarah is juried in London England, Nova Scotia Crafts Council and Craft New Brunswick. 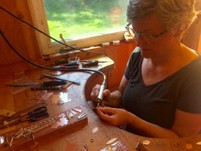 Patty Goodine (finance)
An honours graduate in Metal and Jewellery art at NBCCD, Patty Goodine works with semi precious locally hand-cut stones, sterling silver, copper and bronze. Her pieces are uniquely elegant in their simplicity, inspired by her love of nature and pastoral images of her youth. Patty has exhibited at the George Fry Gallery (NBCCD) and the Lieutenant Governor House (Fredericton). She is currently part of  “Beneath the Surface”, a group exhibit sponsored and published by Parks Canada and Craft NB. 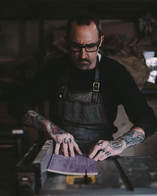 Steve Jones (floor manager)
Juried with Craft NB since 2016, Jones’s career has sky-rocketed. Recipient of the Mayor’s Cup Award (2017), Educational Grant for Fine Craft Industry Development (2017), and part of “Beneath the Surface” artist residency (2017), Steve has become an impressive emerging artist. His work has been on CBC News, CTV news, in a Germany/NB Tourism based televised travel documentary as well as  featured in several publications. Steve’s wood work married with Skateboarding is a magnificent and very unique form of art, inspired by his passion for wood’s warmth and the vibrancy and love of skateboard(ing).